Graphene aerogel is so lightweight that one of awn wheat can hold it without bending.

The way the researchers print the 3D graphene aerogel also can be regarded as revolutionary technology, it using a modified inkjet printer that uses two micro-nozzle and a special graphene oxide (GO) inks are prepared by combining an aqueous GO suspension and silica filler to form a homogenous, highly viscous ink. They 3D print droplets of a graphene oxide and water mixture in a freezer on a cold plate that is minus 20 degrees Celsius. This method creates a 3D ice structure of graphene and frozen water, which helps the graphene to maintain its shape.
After three-dimensional printing is complete, the researchers place the 3D material in a freeze dryer, which removes the ice by providing high vacuum and low temperature. What’s left is a 3D graphene aerogel that maintains its shape at room temperature. 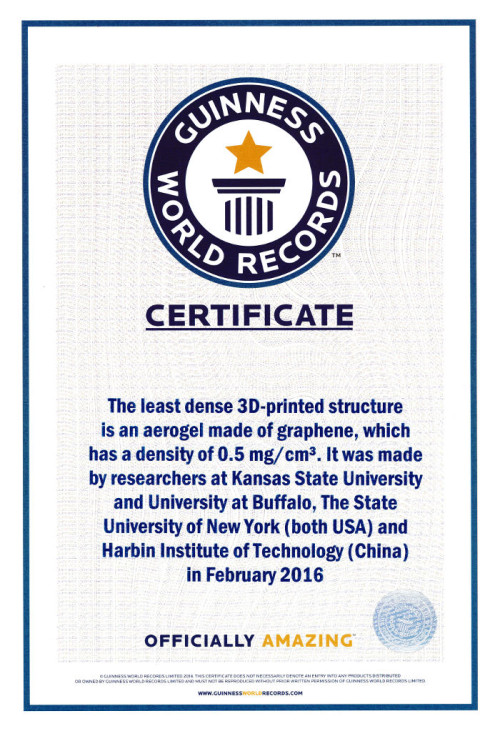 Graphene is the most strong material known in the world, and it built from a single atom-thick sheet of hexagonally coordinated carbon atoms, which makes it the world’s thinnest material and gives it valuable physical and electronic properties.
By this new tech can “Adapting the 3D printing technique to aerogels makes it possible to fabricate countless complex aerogel architectures for a broad range of applications including its mechanical properties and compressibility, which has never been achieved before, ” according to engineer Cheng Zhu, the other co-author of the journal article.

Aerogel is a special material with a lot of applications and that’s why it is one of the hottest materials throughout the world, and that makes graphene aerogel has numerous opportunities, from flexible batteries to better semiconductors, and it could even be used to make better insulation in the construction of buildings.