Researchers at the University of California “UC”, San Diego, new graphene biosensor consist of a chip that has a graphene Field Effect Transistor “FET” which contains a DNA probe.
Detecting mutations in DNA no longer requires a long time, high cost or equipment it once did thanks to a newly developed graphene biosensor.
The double-stranded DNA has a sequence coding engineered to detect DNA or RNA ( RNA is a polymeric molecule implicated in various biological roles in coding, decoding, regulation, and expression of genes. but unlike DNA it is more often found in nature as a single-strand folded onto itself, rather than a paired double-strand. ) with a specific single nucleotide mutation. An electrical signal is produced by the chip whenever this targeted type of DNA or RNA binds to the probe.

Schematic of DNA strand displacement on the graphene biosensor chip

Attached to the probe is a regular strand of DNA is a “normal” strand of DNA, and bonded to this strand is a “weak” strand. The weak strand has four G’s in its sequence replaced with inosines, effectively weakening its bond. Together, the two strands create a double helix which operates DNA strand displacement. 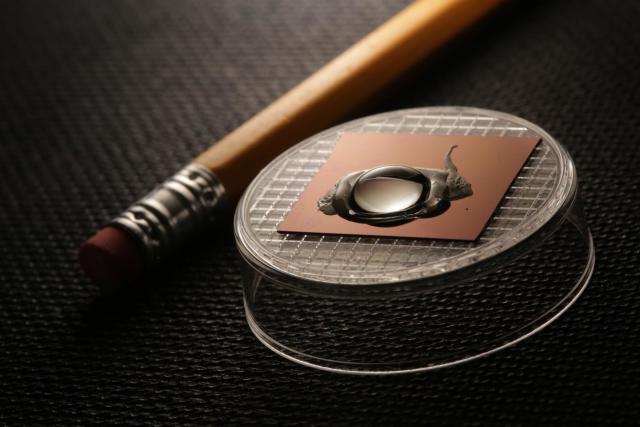 The double-stranded probe also offers greater selectivity than more common single-stranded DNA probe sequencing faster and more efficient only perfectly matched DNA strands to the normal strand are but able to displace the weak strand of the probe also. As a result of using a double-stranded helix, the probe can also be longer. Thus, the chip is able to scan longer segments of DNA for mutations. The longer the probe, the more certain the DNA sequence is unique in the genome.

The Graphene biosensor chip offers a new method of detecting the most common genetic mutation, a single nucleotide polymorphism “SNP” is a variation in a single nucleotide in the DNA sequence that occurs at a specific position in the genome, where each variation is present to some appreciable degree within a population