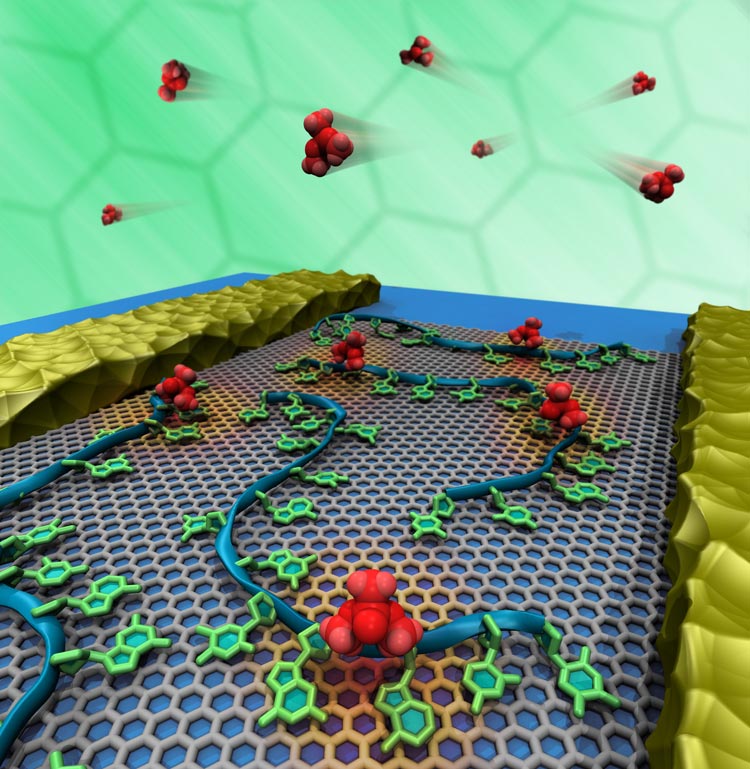 Researchers led by professor Owen Guy, Director of Swansea University’s Centre for Nanohealth in the UK, have developed both graphene and silicon nanowire (SiNW) electrochemical devices as nano-channel biosensors. Extensive development of novel and generic chemical and bio-functionalization technology has enabled the attachment of antibody “bio-receptors” to epitaxial graphene and SiNWs surfaces. The attached bio-receptors are capable of specific and selective interaction with disease biomarkers.
Biosensor diagnostics based on bio-functionalized semiconductor devices are an important development in ultrasensitive sensors for early detection of disease biomarkers and when it targeted biomarker molecule interacts with the “bio-receptor” functionalized surface, the charge density at that surface is affected. This change can be detected as an electrical signal from the biosensor, enabling highly sensitive (nM) detection of biomarker analytes. Electrochemical devices using Chemically Modified Graphene (CMG) channels are excellent candidates for nano-biosensors.

This kind of biosensor depended on Graphene and it epitaxial graphene has been grown on silicon carbide (SiC) substrates under high vacuum and high-temperature conditions (1200 – 1700°C). A generic electrochemical surface functionalization chemistry, which can be used to attach a variety of “bio-receptors” to graphitic surfaces, has been developed. The attached bio-receptors are capable of specific and selective interaction with disease biomarkers. When a target biomarker molecule interacts with the “bio-receptor” functionalized surface, the charge density at that surface is affected. This change can be detected as an electrical signal from the biosensor, enabling highly sensitive (nM) detection of biomarker analytes.

Nanoscale-biosensors could provide early detection and diagnosis of disease, and enable real-time monitoring of patient’s conditions with less invasive and more user-friendly technology – benefitting their quality of life. The exceptional properties of graphene are well known, making it an ideal material for the fabrication of nano-scale electronics and sensors. Like carbon nanotubes (CNTs), graphene is both electrically conductive, shows good biocompatibility and can be functionalized with biomolecules. Silicon Carbide (SiC), an advanced semiconductor material, has been discovered to be a suitable substrate for graphene growth. During annealing at temperatures of between 1200ºC and 1700ºC the SiC surface reconstructs itself, with silicon atoms subliming and leaving behind a layer, or multiple layers, of epitaxial graphene. A key advantage of graphene prepared in this manner over conventional graphene production (exfoliation from HOPG substrates) is the capacity to grow graphene on flat, large-area substrates. These large areas of graphene, up to 100 mm in diameter, can subsequently be fabricated using standard semiconductor processing techniques. Several papers have reported the development of graphene-based electronic devices, with device performance varying significantly with the growth techniques for graphene. The quality of the graphene layer critically influences its electrical properties. The SiC orientation and surface termination (carbon-terminated C-face or silicon terminated Si-face) have a critical effect on the graphene growth rate and the integrity of the graphene layer formed. This variation is understood to be due to the graphene-SiC interface effects. Carrier mobilities of 27,000 cm2/V s have been reported for graphene films on SiC at 4 K, grown on the C-face of 4H-SiC, while C-face multilayer epitaxial graphene (MEG), typically 10-20 layers thick, exhibits carrier mobilities similar to highly doped single-layer graphene.

In addition to the sensor device and functionalisation technology, the Swansea team has developed an integrated, hand-held, point of care system.
This system, based on a “credit-card biochip” and hand-held “card reader” is simple to use and completely portable. Each single use card simply slots into the card reader where a reference measurement is taken. The card reader then instructs the patient to drop a sample of urine onto the biochip and an another measurement is subsequently taken. The card reader displays whether or not the biomarker is present in the urine sample and at what concentration. The card reader is then able to give a simple instruction to the patient e.g. “Biomarker detected – please consult your physician”.
The POC system can be developed further to send or receive data to / from a trained physician.
The POC biochip system could eventually provide an ultra-sensitive, fast-diagnosis, cost-effective test for numerous disease biomarkers – potentially revolutionizing healthcare by bringing diagnosis and monitoring to the point-of-care.