A lot of people face a problem when cell phone fall down because it can cause to break the screen and make it don’t work and cast of repair it too expensive, but it will be part of the past soon because of flexible electronic it can create flexible screen and it impossible to break or crack!

Currently, the majority of tablets and smartphones are made using indium tin oxide, which is both expensive and inflexible. Crack a screen and you’ll know about the first of those problems. The second might start to become apparent if the industry starts to produce bendable communications devices, perhaps in the form of smartwatches which could clearly benefit from a bit of flexibility. 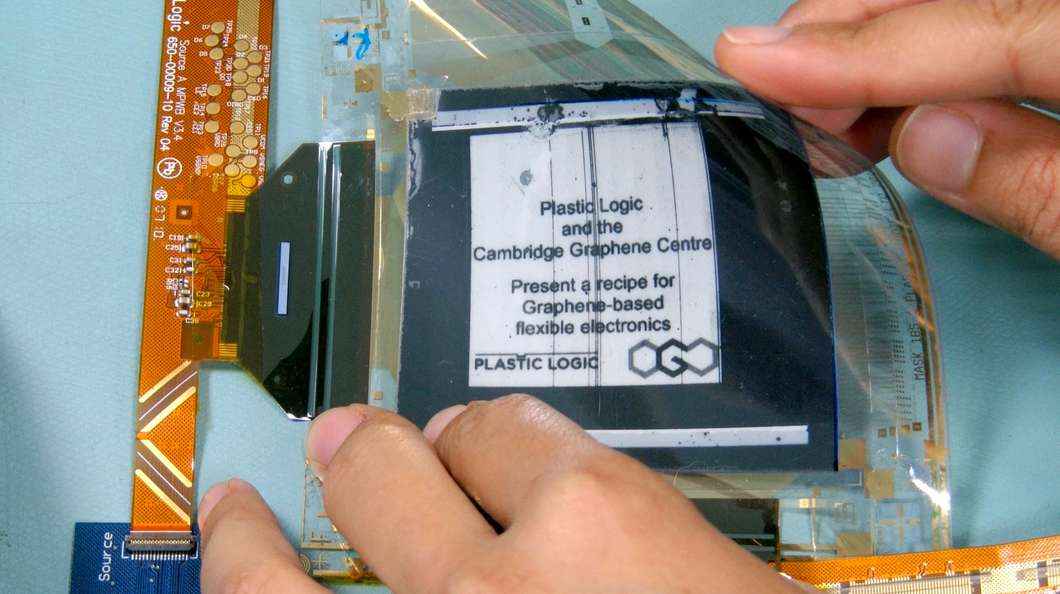 First flexible screen depends on graphene produced by the University of Cambridge Graphene Centre and UK firm Plastic Logic, is similar to the screens used in e-readers. However, instead of being composed of sheets of glass, it is created using screens of flexible plastic and is the first time graphene has been used in a transistor-based flexible device.

In a further difference to conventional displays, the backplane (the common electrical connection layer which supplies power, in this case, to rearrange the suspended display particles) incorporates an emulsion-processed graphene electrode, instead of the standard sputter-deposited metal electrode layer. In other words, the backplane layer can be produced using a low-temperature process in which the graphene is essentially “printed” onto the substrate.

In this instance, the 150 pixels per inch backplane created was produced at temperatures of less than 100° C (212° F) using Organic Thin Film Transistor technology developed by Plastic Logic. The subsequently deposited electrode was then etched with the required circuit patterns to provide the network of backplane connections.

Though flexible screens are already appearing in electronic devices today, such as those produced by manufacturers like LG, this new graphene-based display is the first to realize the use of what is rapidly becoming a low-cost, high-volume solution in electronics.

Researchers in University of Manchester and University of Sheffield show that new 2D ‘designer materials’ can be produced to create flexible, see-through and more efficient electronic devices.
The team, led by Nobel Laureate Sir Kostya Novoselov, made the breakthrough by creating LEDs which were engineered on an atomic level.
The new research shows that graphene and related 2D materials could be utilised to create light emitting devices for the next-generation of mobile phones, tablets and televisions to make them incredibly thin, flexible, durable and even semi-transparent.
The LED device was constructed by combining different 2D crystals and emits light from across its whole surface. Being so thin, at only 10-40 atoms thick, these new components can form the basis for the first generation of semi-transparent smart devices.Freddie Withers, Royal Academy of Engineering Research Fellow at The University of Manchester, who led the production of the devices, said: “As our new type of LED’s only consist of a few atomic layers of 2D materials they are flexible and transparent. We envisage a new generation of optoelectronic devices to stem from this work, from simple transparent lighting and lasers and to more complex applications.”
Explaining the creation of the LED device Sir Kostya Novoselov said: “By preparing the heterostructures on elastic and transparent substrates, we show that they can provide the basis for flexible and semi-transparent electronics. 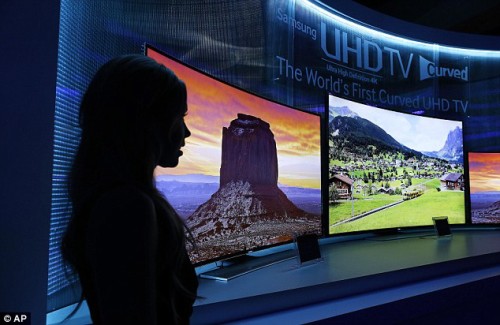 Now, beating all previous records for the synthesis of graphene in the laboratory, researchers at Samsung and Sungkyunkwan University, in Korea, have produced a continuous layer of pure graphene the size of a large television, spooling it out through rollers on top of a flexible, see-through, 63-centimeter-wide polyester sheet.

“It is engineering at its finest,” says James Tour, a professor of chemistry at Rice University who has been working on ways to make graphene by dissolving chunks of graphite. “[People have made] it in a lab in little tiny sheets, but never on a machine like this.”The team has already created a flexible touch screen by using the polymer-supported graphene to make the screen’s transparent electrodes. The material currently used to make transparent electronics, indium tin oxide, is expensive and brittle. Producing graphene on polyester sheets that bend is the first step to making transparent electronics that are stronger, cheaper, and more flexible. “You could theoretically roll up your iPhone and stick it behind your ear like a pencil,” says Tour. 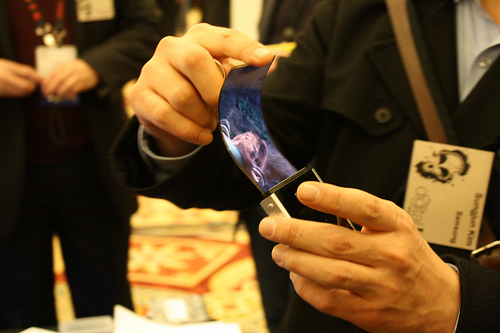 Graphene have many flexible screen types:

Projected future developments may also include LCD and OLED technologies to provide full-color capabilities and support for high-speed refresh rates required for displaying video. The team also envisages the new flexible backplanes may be lightweight and malleable enough to be used as high-density sensors for use in such things as high-resolution medical imaging systems or super-accurate gesture recognition applications, LG unveiled an 18-inch screen that can be rolled up, and it is hoping to expand the technology to work with 60-inch displays in the future.
This flexible OLED panel has a high-definition class resolution of 1200 x 810 with almost 1 million megapixels.