Scientists from the School of Chemical Engineering and Analytical Science, in the University of Manchester, have come up with a way to utilize 2D materials in an actual operating direct methanol fuel cell. They have shown that the addition of single layer graphene by Chemical vapor deposition, onto the membrane area, has significantly reduced the methanol crossover at the same time obtaining negligible resistance to protons thereby enhancing the cell performance by 50%.

Fuel cells count as interesting energy technology of the near future, as they pave the way for the production of sustainable energy using simple hydrocarbons as fuels. They work by a simple operational mechanism with the fuel oxidation on one side, and oxidant reduction on another side, which liberates electrons used for electrical energy generation. A wide variety of fuels, short chain alcohols have been used so far. Methanol remains a favorable candidate due to its high energy density, ease of handling and other operational characteristics.

Hence methanol fuel cells find their potential use in laptop chargers, military applications or other scenarios where the access to electricity is difficult. However, the wider spectrum of commercial potential for methanol systems is greatly hindered by the methanol crossover occurring in the membrane area of fuel cells. 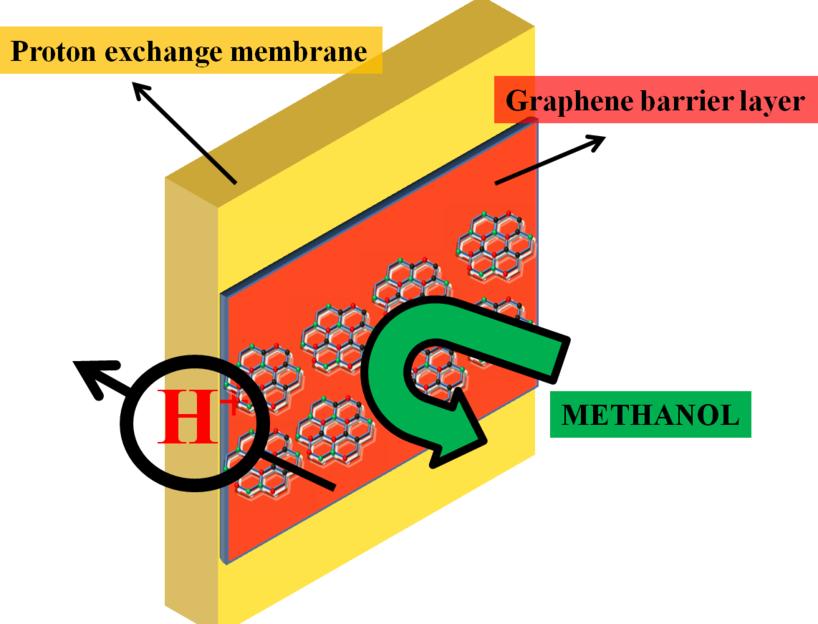 This passage of methanol from the anode to cathode through the membrane creates a short circuit and affects the fuel cell performance negatively. This is mitigated by using a barrier layer, in addition to the membrane used.

Andre Geim and his co-workers discovered the proton transfer through the single layer graphene and other 2D materials. Graphene is also known for its dense lattice packing structure, inhibiting the passage of methanol and other hydrocarbons based molecules across the membrane. However, the actual application of these 2D materials, in fuel cell systems has not yet been realized.

Previous work in this field also tested different materials that yielded improved performance by reducing the methanol crossover, but these also significantly reduced proton transport, as opposed to this work in which it remained unharmed. This would be of significant interest, as this would lead to usage of 2D materials in fuel cells.

Moreover, this gives the opportunity for membrane less fuel cell system operating with higher efficiency in the near future. This technology could further be extended to other fuel cells types namely hydrogen fuel cells. Hydrogen fuel cells suffer from the usage of high-cost humidifier, as these membranes need to be humidified for improved proton conductivity.

Whereas graphene showed improved proton conductivity with temperature, without the need for humidifier systems. The future prospect could be realized in such a way that the fuel cells will make a significant contribution to the future energy demand.