A chunk of conductive graphene foam reinforced by carbon nanotubes can support more than 3,000 times its own weight and easily bounce back to its original height, according to Rice University scientists.

Better yet, it can be made in just about any shape and size, they reported, demonstrating a screw-shaped piece of the highly conductive foam.
The Rice lab of chemist James Tour tested its new “rebar graphene” as a highly porous, conductive electrode in lithium ion capacitors and found it to be mechanically and chemically stable.
The research appears in the American Chemical Society journal ACS Applied Materials and Interfaces.
Carbon in the form of atom-thin graphene is among the strongest materials known and is highly conductive; multiwalled carbon nanotubes are widely used as conductive reinforcements in metals, polymers and carbon matrix composites. The Tour lab had already used nanotubes to reinforce two-dimensional sheets of graphene. Extending the concept to macroscale materials made sense, Tour said.
“We developed graphene foam, but it wasn’t tough enough for the kind of applications we had in mind, so using carbon nanotubes to reinforce it was a natural next step,” Tour said.
The three-dimensional structures were created from a powdered nickel catalyst, surfactant-wrapped multiwall nanotubes and sugar as a carbon source. The materials were mixed and the water evaporated; the resulting pellets were pressed into a steel die and then heated in a chemical vapor deposition furnace, which turned the available carbon into graphene. After further processing to remove remnants of nickel, the result was an all-carbon foam in the shape of the die, in this case a screw. Tour said the method will be easy to scale up. 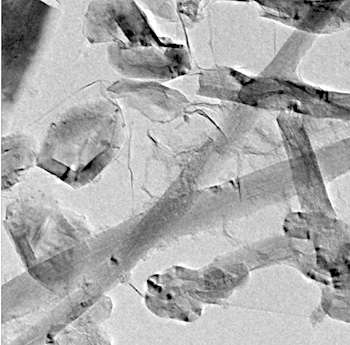 Electron microscope images of the foam showed partially unzipped outer layers of the nanotubes had bonded to the graphene, which accounted for its strength and resilience. Graphene foam produced without the rebar could support only about 150 times its own weight while retaining the ability to rapidly return to its full height. But rebar graphene irreversibly deformed by about 25 percent when loaded with more than 8,500 times its weight.
Junwei Sha, a visiting graduate student at Rice and a graduate student at Tianjin University, China, is the lead author of the paper. Co-authors from Rice are postdoctoral researchers Rodrigo Salvatierra, Pei Dong and Yongsung Ji; graduate students Yilun Li, Tuo Wang, Chenhao Zhang and Jibo Zhang; former postdoctoral researcher Seoung-Ki Lee; Pulickel Ajayan, chair of the Department of Materials Science and NanoEngineering, the Benjamin M. and Mary Greenwood Anderson Professor in Engineering and a professor of chemistry; and Jun Lou, a professor of materials science and nanoengineering. Naiqin Zhao, a professor at Tianjin University and a researcher at the Collaborative Innovation Center of Chemical Science and Engineering, Tianjin, is also a co-author. Tour is the T.T. and W.F. Chao Chair in Chemistry as well as a professor of computer science and of materials science and nanoengineering at Rice.