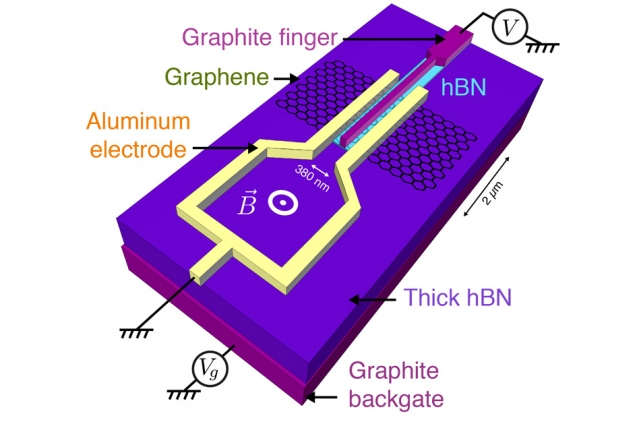 Physicists researchers from MIT have found a way to turn graphene into a material capable of conducting supercurrents, Their technique puts graphene in between two superconductors that change graphene’s electron states.
The quest for a

more efficient current that which travels without losing energy is fundamental to the development of electronics. Generally, researchers either create materials that can conduct electricity perfectly (It called superconductors) or they develop materials capable of sustaining an electric current that flows without being converted into heat (so-called supercurrents).

New research published in Nature Physics by physicists from the Massachusetts Institute of Technology (MIT) combines both. In particular, they discovered that a flake of graphene sandwiched between two superconducting materials can change its electronic state.

“Electrons in a superconductor dance harmoniously in pairs, like a ballet, but the choreography in the left and right superconductors can be different,” lead author Landry Bretheau explained. “Pairs in the central graphene are frustrated as they try to satisfy both ways of dancing. These frustrated pairs are what physicists know as Andreev states; they are carrying the supercurrent.”

In short, graphene inherits the superconducting abilities of these materials as its electrons pair up into “Andreev states” where non-superconducting materials become capable of carrying supercurrents,
the researchers’ graphene platform may be used to explore exotic particles, says lead author Landry Bretheau, a postdoc in MIT’s Department of Physics. “In particular, new particles called Majorana fermions are predicted to emerge in graphene that is connected to superconducting electrodes and exposed to large magnetic fields. Our experiment is promising, as we are unifying some of these ingredients.”, These particles “Majorana fermions” which are thought to arise from “Andreev states” and may be key particles for building powerful, error-proof quantum computers.

This research isn’t the first to explore graphene’s superconducting potential. Graphene is an incredible material capable of many other feats that have a variety of useful applications. There’s research being done that explores using graphene to develop better batteries, as well as a material for wearable electronics and photoelectronic devices.

This research by Bretheau and his colleagues could help to expand and refine these potential applications. They’re also confident that their graphene platform could lead to further research that explores other particles, particularly Majorana fermions.

“There are proposals for how to use Majorana fermions to build powerful quantum computers,” Bretheau said. “These particles could be the elementary brick of topological quantum computers, with very strong protection against errors. Our work is an initial step in this direction.”