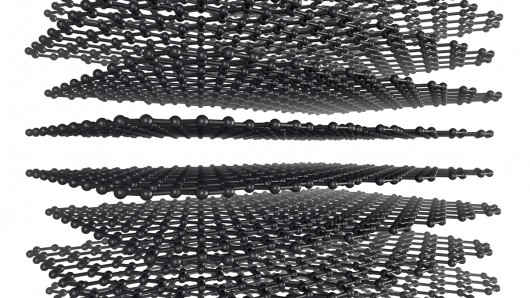 Researchers from the University of Madras in India have managed to produce a monolayer or a few layers thick graphene nanosheets from graphite, using a simple, inexpensive and quick process without the use of strong oxidizing or reducing agents.

Liquid-phase exfoliation methods are widely adopted for synthesizing graphene from graphite for their relative ease and cost-effectiveness. Still, the use of strong solvents and relatively low yield have turned out to be major drawbacks, limiting its utilization in the large-scale production of graphene. Now, the Madras team used ultrasound along with water, glacial acetic acid (CH3COOH – a mild solvent), and ethanol (C2H6O) to exfoliate graphite into graphene sheets.While electrostatic bonds between the cleavage planes do not allow the acid to get in, supplying additional mechanical energy in the form of ultrasonic waves enables the organic acid to penetrate deeper into the graphitic flakes and exfoliate the individual layers of graphene.

After breaking the bonds, which can be a bit time consuming, the graphene attracts hydroxide (OH) from ethanol and -COOH from glacial acetic acid onto the open sites. “The hydroxide and -COOH form functional groups on the surface of graphene and the individual exfoliated graphene nanosheets are prevented from restocking” according to the researchers.

Due to minimized restocking and long-term stability, the capacitor characteristics reportedly become better. Compared with graphene-metal oxide nanocomposites, the graphene nanosheets exhibited a much greater capacity for storing charge. The graphene nanosheets had over 94% ability to retain their original charges even after 50 cycles of charging and discharging.

Though it’s currently just a proof-of-concept work, the team states that this novel approach can play a vital role in some specific applications such as supercapacitors and other engineering related applications and environmental remediation.