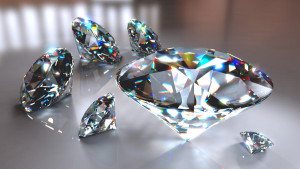 Scientists have discovered that it takes more energy to make the cubic form than previously realized, solving a puzzle in how lonsdaleite forms, and potentially helping us synthesize harder crystals.

To make a diamond, you simply squeeze graphite to pressures of around 20 gigapascals (or almost 200,000 times atmospheric pressure), resulting in one of two different arrangements of carbon.

The carbon atoms tend to rearrange into hexagonal lattices at pressures just under 20 gigapascals, and into cubic structures when this pressure is greater.

But current models predict we should be seeing the cubic variety format both pressures, prompting researchers from Fudan University and the University of Shanghai in China to use a new kind of modeling process to discover why.

Both kinds of diamond and graphite are described as allotropes of carbon, which means they’re all made of carbon atoms linked together in different ways.

In graphite, each carbon atom forms a bond with three other atoms, producing flat honeycomb-like sheets called graphene, which flake away from adjoining layers rather easily.

Applying large amounts of pressure squeezes these layers in such a way that the carbon atoms in the graphene can form a bond with adjoining sheets, connecting the layers into a 3D block of crystal we know as diamond.

There are two ways this can happen – one where the graphene sheets line up in the same direction, and one where each consecutive layer is oriented in the opposite direction. 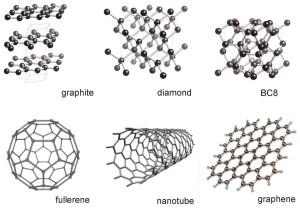 Graphite and diamond the two most well-known allotropes of carbon

The clear, nicely cut diamonds we enjoy in our engagement rings are typically made from sheets of graphene that are aligned.

This kind of diamond can be found naturally bubbling up from deep under Earth’s crust in rising columns of magma that cool into a type of igneous rock called kimberlite.

A diamond that is formed from layers of graphene with alternating orientations is described as hexagonal and appears as small, yellow-brown crystals.

Called lonsdaleite, these crystals are extremely rare, occasionally found as flawed crystals around the sites of meteorite impacts.

The problem is that the model describing diamond formation predicts that cubic diamonds should form at pressures a little below 20 gigapascals before lonsdaleite forms since less energy is thought to be needed to squeeze aligned graphene sheets into a cubic form than the hexagonal structure.

But this isn’t what we see in reality, giving chemists a bit of a riddle to solve.

The researchers used a type of simulation called ‘stochastic surface walking’ to compare the different ways atoms could form bonds as the graphite transitioned into diamond – and to find the ones that relied on the intermediate arrangements with the lowest energies.

This added stability influences what’s called the reaction kinetics – the speed at which a chemical process occurs – and which makes hexagonal structures form 40 times quicker than the cubic diamond structure.

In other words, the existing models are missing a key step, leading to the assumption that it takes less energy to make cubic diamonds than hexagonal ones, where it actually takes more.

This research could have applications beyond diamond production, such as being used to solve similar problems in other transitions between solid allotropes.

In industry, diamonds are prized for their hardness, which is where lonsdaleite is king – in a pure form, it’s 58 percent harder than its cubic cousin.

In spite of being the preferred format this pressure, they are still incredibly difficult to produce in useful sizes and therefore are quite rare.

“While cubic diamond is familiar in everyday life and is a highly useful material, hexagonal diamond could also be very useful,” researcher Zhi-Pan Liu told Lisa Zyga at Phys.org.

On the other hand, some researchers think smaller is smarter, looking to produce nanoscale hexagonal diamonds with the view that they would be stronger than the larger crystals.

Whichever kinds of diamonds we want – whether cubic or hexagonal, big or small – at least we now have a better idea of how they form.

This research was published in the Journal of the American Chemical Society.