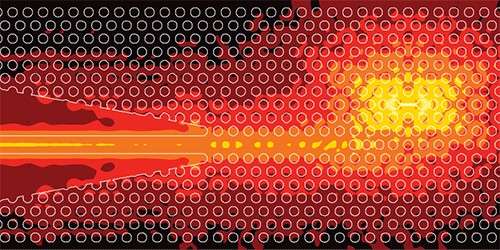 Super optical sensor very important to develop optical electronics and The optical computer structure, the optical or photonic computing technology depend on uses photons rather than electric pulses in computer data and processing, and  these detectors can be used At terahertz frequencies, they allow astronomers to study how galaxies form by detecting photons from the cosmic infrared background, or in optical communications in deep space and for distributing “quantum keys” in space networks.
The new device can detect single photons in a wide electromagnetic spectrum, ranging from the visible down to the low end of radio frequencies, to high frequency at gigahertz range.
Its developed by ICFO researcher and group leader Prof. Dmitri Efetov, in collaboration with researchers from Harvard University, MIT, Raytheon BBN Technologies and Pohang University of Science and Technology, consists of a sheet of graphene contacted on two ends by superconductors. This configuration depends on Josephson effect, in which the two superconductors are separated by a weak link Graphene-based Josephson Junctions (GJJs),
“In the absence of photons, a supercurrent can pass through the graphene and we detect no voltage difference between the superconducting contacts,” explains Englund. “When a photon is absorbed, however, the electrons in graphene heat up, blocking the supercurrent and leading to a voltage spike that we can measure.”
Usually, graphene and superconductor it is cooled down to 25 mK. Under these conditions, the heat capacity of the graphene is so low, that when a single photon hits the graphene layer, it is capable of heating up the electron bath so significantly, that the supercurrent facing resistance and easily detectable the change of voltage spike across the device. In addition, they also found that this effect would occur almost instantaneously, thus enabling the ultrafast conversion of absorbed light into electrical signals, allowing for a rapid reset and readout.
Englund, adds the new single-photon detector could be used in astronomy as well as in quantum information processing in supercomputers because The latter is especially promising since the best quantum computing technology to date relies on Josephson junctions, so it would be somewhat natural to couple our detector to these systems.