Researchers at Stanford have found a way to improve the performance of next-generation processors by coating copper interconnects with graphene.

The biggest factor influencing the improved performance of processors is transistor scaling, which is the concern of Moore’s law, but there are other factors which become important as silicon transistors shrink but graphene can use instead of silicon to make transistors and can lead to the graphene CPU and it the fastest CPU ever.

Transistors communicate using copper interconnects, which have begun to approach their limitations as new semiconductor nodes are brought online.

As engineers pack more transistors into the same area, this increases the density of the interconnects – resulting in increased heat.

The first processors with copper interconnect used 1km of copper wiring per square centimeter, while modern 14nm CPUs contain over 10km of interconnects in the same area.

While tantalum nitride trenches are a solution, they are not effective for smaller semiconductor nodes. 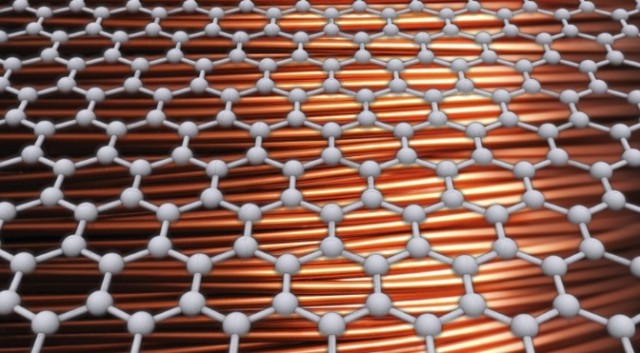 Here’s where Stanford’s research comes in. The reason the copper wires are traditionally wrapped in tantalum nitride is to ensure that copper doesn’t migrate into the surrounding area of the chip. One of the team’s findings was that the tantalum nitride layer is roughly 8x thicker than an equivalent layer of graphene that performs the same function. That’s important in and of itself, as it allows wires to be made thinner overall without actually changing the amount of copper (think of this as making a water pipe thinner by reducing the exterior diameter but leaving the interior diameter unchanged.

The second and arguably more important reason is that the graphene effectively acts as a secondary conduction path for the copper itself. Today, the effect is relatively modest sheathing copper wires in graphene boosts speeds by 4-17% depending on the length of the wire. In future chips, however, the benefits could be more significant wires might be up to 30% faster while still scaling to smaller sizes. Because wire delays have become one of the most significant performance limiters in modern semiconductor designs, increasing copper wire speeds could improve multiple aspects of chip design and power consumption.

We are more optimistic about this use of graphene as compared to its use in semiconductors. Using graphene in semiconductors requires changing some of the fundamental properties of the material or changing everything about how we build semiconductors. The one fly in the ointment will be volume production. The researchers talk about growing the graphene layers directly around the wire, but graphene has proven extremely difficult to create in volume. Until we crack that particular problem, we won’t be building anything with graphene in significant quantities.