Researchers at Harvard University in the US have made novel biosensors from graphene transistors that work in high-ionic-strength solutions typical of biological systems. The devices could be used to analyze blood and body fluids in real time, and analyze proteins, nucleic acids and other molecules without the need for target fluorescent labeling. They might even be exploited in implantable electronic probes such as those that detect critical neurotransmitter signals within the brain.

Nanoscale field-effect transistor (FET) sensors could be ideal for label-free real-time detection of biomolecules, but they also have, what many researchers thought, an insurmountable limitation, explains team leader Charles Lieber. “This was that they could not be used in physiological conditions because the high ionic strength would produce a short Debye length, thus screening the charge that we wish to detect. Previous work (including that by our group) tried to overcome this problem by reducing the ionic strength of the solutions used, but this means that we can’t detect biological molecules in their real environment.”

Lieber and colleagues have now found a way around this problem by extending a concept they recently reported for nanowire FET devices in which graphene FET sensors are modified with a biomolecule-permeable polymer layer made from polyethylene glycol (or PEG) and spacer molecules, or PEG and analyte-specific DNA-aptamer receptors. “The polymer layer increases the effective Debye screening length near the FET surface and thus allows us to directly detect molecules in high-ionic-strength solutions in real time,” says Lieber.

“We showed that PEG-coated graphene FETs in physiological concentrations (100 mM buffer solution) can reversibly detect a molecule known as prostate-specific antigen (PSA) at concentrations from 1 to 1000 nM,” as he tells the media. “In contrast, similar FETs without PEG functionalization can only detect PSA in buffer salt concentrations lower than 50 nM.”

“Another important result is that when we co-modified graphene devices with PEG and aptamers yielding specific binding and detection of PSA at physiological pH, these devices showed high selectivity against other proteins,” he adds. “We also demonstrated that the PEG/aptamer-modified biosensor can be regenerated so that it can be applied as a multi-use selective biosensor under physiological conditions.” 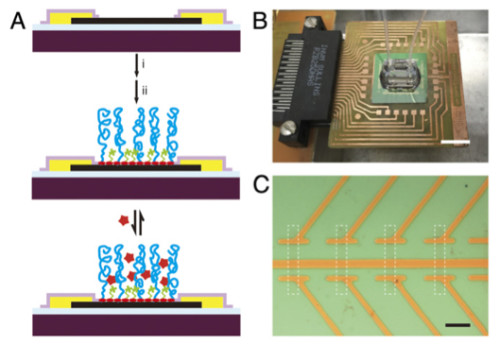 “To detect biomolecules in physiological solutions, we selectively modified the graphene device surfaces by absorbing pyrene butyric acid (PYCOOH) onto them,” explains Lieber. “Then, the functional carboxyl groups (COOH) were coupled to PEG and spacer molecules or PEG and aptamer receptors using 1-ethyl-3-(3-dimethylaminopropyl)carbodiimide hydrochloride (EDC) and N-hydroxy ULF succinimide (Sulpho-NHS). The modified device chips were finally mated to a polydimethylsiloxane (PDMS) microfluidic channel on the device region for the sensing measurements.”

According to the team, reporting its work in PNAS doi: 10.1073/pnas.1625010114, there are many “exciting” applications for the devices, including truly unique clinical and point-of-care sensors that can analyze blood and body fluids directly without having to adjust the high ionic strength of these fluids. “New applications for fundamental biological studies where we can analyze proteins, nucleic acids and other species in real time without the need to fluorescently label the targets both outside and inside cells are possible,” says Lieber. “We could even apply this unique physiologically compatible non-destructive detection capability to make implantable electronics probes – such as our recently reported syringe-injectable electronics, where it could be possible not only to detect electric signals but also ones from critical neurotransmitters within the brain in real time.”

The researchers say they are now planning to incorporate their FET biosensors into free-standing nanoelectronics scaffolds to enable long-term monitoring in biological and electrical signals in engineered tissues. “We believe this could dramatically transform tissue implants in regenerative medicine,” adds Lieber.