Graphene have many wonderful features can make revaluation in electronics and create new devices and parts with extreme feature like flexible screens and flexible ICs  , It’s a promising material for new types of systems, circuits and devices where several functionalities can be combined into a single material and every day Graphene uses in electronics grow more and more .

Microprocessor CPU in any computer , mobile or any smart device have thousands or millions of transistors works as valves , Electronics have come a long way since the development of the vacuum tube. Around 70 years ago, these bulky, fragile objects, known colloquially as valves, gave way to semiconductor transistors. Reduced to the nanoscale, and assembled in their millions and billions, transistors form the basis of today’s computer processors.

The electronics industry is increasingly focused on mobile devices which could benefit from the replacement of silicon-based transistors with components that draw significantly less power. It is hoped that low-power transistors made from graphene and related two-dimensional materials will re-energise the electronics industry, leading to disruptive technologies and products that to date remain the province of innovative minds and fertile imaginations.

Graphene use to create RAM with super features :

Now most RAM make from ferroelectric material and all research work to make it more and more thin , The junction features a ferroelectric layer 100,000 times thinner than a sheet of paper, so thin that electrons can “tunnel” through it. This layer resides between two electrodes that can reverse the direction of its polarization — the alignment of positive and negative charges used to represent “0” and “1” in binary computing  by applying electric voltage to it.

The researchers became the first to design a ferroelectric junction with electrodes made of graphene, a carbon material only one atom thick. While its extreme conductivity makes graphene especially suited for small-scale electronics, the authors’ primary interest lay in how it accommodated nearly any type of molecule — specifically, ammonia — they placed between it and the ferroelectric layer.

Applications of Carbon Nanotubes and Graphene for electronics applications :

They can be transparent, flexible and even stretchable. Here, applications are for displays, replacing ITO; touch screens, photovoltaics and display bus bars and beyond. Depending on their chemical structure , Carbon NanoTubes (CNTs) can be used as an alternative to organic or inorganic semiconductors as well as conductors, but the cost is currently the greatest restraint very expensive . However, that has the ability to rapidly fall as new, cheaper mass production processes are established, which we cover in this report. In electronics, other than electromagnetic shielding, one of the first large applications for CNTs will be conductors. In addition to their high conductance, can give very strange features like extremely strong , transparent and flexible.

There are a range of technologies available for energy storage, each having a number of tradeoffs in terms of capacity, weight and performance. Capacitors are quick to charge and lightweight, but do not have a large capacity. Batteries are capable of retaining more charge, but are heavy and take a long time to recharge. This variety is good as it offers a number of options to fine-tune a device to suit specific requirements.

Researchers have developed a graphene foam-based battery design that may bridge the gap between batteries and capacitors. It is based on lithium technology, and even in experimental form has a similar capacity to weight ratio to existing lithium ion batteries. It can discharge and charge as quickly as a capacitor and can discharge completely in 20 seconds. It is also flexible, and works perfectly when it is bent.

Graphene film is a strong candidate for the replacement of indium tin oxide, which is a commercial product used extensively as a transparent conductor. It is used in touch screens on table computers and smartphones and is used as an electrode in solar cells and OLEDs.

One graphene-based thin film developed by Rice University researchers integrates a high-conductivity graphene single-layer sheet with a fine metal nanowire grid. According to researchers, the material outperforms ITO and other competing materials with lower resistance and higher transparency to electric current and will be flexible to avoid broken or scratch so Graphene flexible screen make all another screens types part of the past . 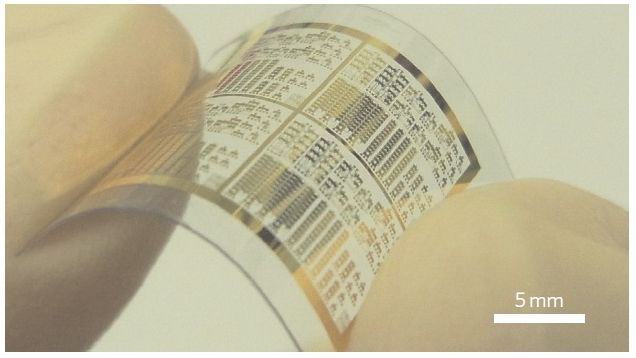 Flexible and transparent transistors made by Graphene and Carbon Nanotube tech

The transparent memory technology is based on the 2010 discovery that pushing a strong charge through standard silicon dioxide, which is an insulator used commonly in electronics, strips oxygen atoms off the material, resulting in pure silicon crystal channels less than 5 nm wide.

In 2012, the Rice team used this phenomenon to create a two-terminal transparent memory device. After the initial large current creates the nanochannels, smaller charges can then be used to break or make the circuit to encode binary information, and a still smaller current can be used to check the state of the memory without changing it.

In June 2011, IBM researchers announced the design of a high-speed graphene circuit. In 2010, IBM produced a working transistor with graphene – a great achievement since graphene is not a natural semiconductor. Despite the technical challenges, this first working graphene transistor operated at twice the speed of a comparable silicon transistor.

A working transistor means nothing unless it is integrated into a circuit, implying that a number of transistors are linked to perform a task. In this instance, IBM scientists constructed a broadband radio frequency mixer that is used in radio applications to process signals at a range of frequencies. It is a standard IC component and this achievement shows that graphene transistors can be used effectively in more complex systems.

IBM overcame a number of challenges to make this possible, including protecting the ultra-thin graphene layer during the etching process with electron beam lithography, which is a standard process for creating nanoscale features in silicon-based electronics. Though this is in the prototype stage, if IBM is able to commercially produce graphene transistors, it will change the face of electronics.

The only problem with graphene is that high-quality graphene is a great conductor that does not have a band gap (it can’t be switched off). Therefore to use graphene in the creation of future nano-electronic devices, a band gap will need to be engineered into it, which will, in turn, reduce its electron mobility to that of levels currently seen in strained silicone films. This essentially means that future research and development needs to be carried out in order for graphene to replace silicone in electrical systems in the future. However, recently a few research teams have shown that not only is this possible, it is probable, and we are looking at months, rather than years, until this is achieved at least at a basic level. Some say that these kinds of studies should be avoided, though, as it is akin to changing graphene to be something it is not.